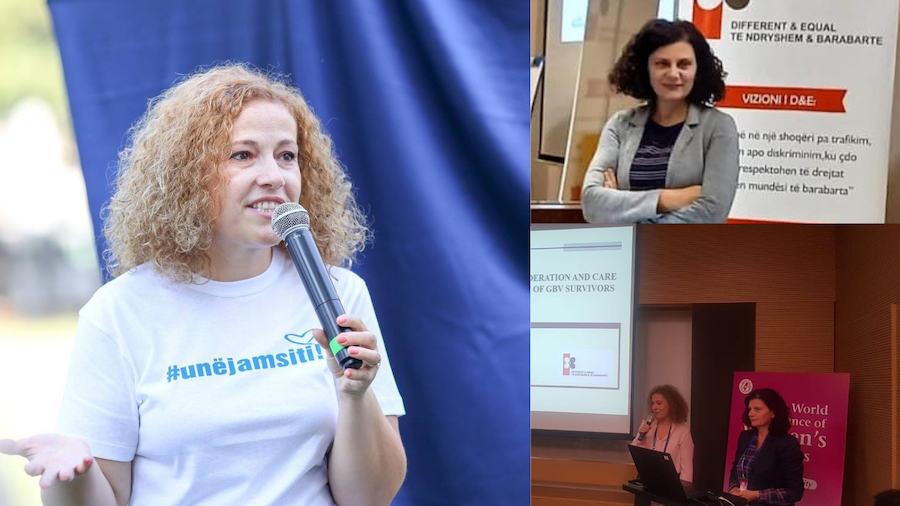 Since 2004, Different & Equal (D&E), a non-profit organization based in Tirana, Albania, has been providing high-quality reintegration services for victims of trafficking, exploitation and abuse, and contributed to improving the social and legal context, in which these abuses are happening. Other D&E activities include awareness-raising campaigns, capacity building, and outreach work to identify victims.

Since their inception, D&E has been practising the survivor-centred approach through their long-term reintegration programme. The aim of D&E’s multidisciplinary team composed of social workers, psychologists, doctors, lawyers and care workers is to put the rights and needs of each victim of trafficking at the forefront of all actions and ensure that each survivor is treated with dignity and respect. Besides that, the professional team provides 24-hours, seven days a week services for survivors, including placement in accommodation as well as psychological, medical and legal support. In addition to the assistance in improving living conditions, they provide vocational training, employment and other services until survivors can build new lives. Such an approach promotes recovery, reduces the risk of further harm and reinforces self-determination and successful reintegration back into society. This counts as one of the most important achievements for this organisation. Despite economic, political and social challenges, more than 70 per cent of survivors are successfully re-integrated into society [in Albania]. Among other positive programmes, the organization provides support and safety for children of survivors who also went through traumatic experiences and need healing and care. Eventually, survivors express their desire to be included in different projects and awareness raising activities that D&E organises every year. They also bring their own ideas and initiate projects that can help other survivors, which is important for their path to recovery.

The D&E model of reintegration and economic empowerment for survivors of trafficking in Albania has the potential to be replicated elsewhere. The programme of reintegration lasts from two to five years depending on the case. Practising a survivor-centred approach means establishing a relationship with survivors that promotes their emotional and physical safety, builds trust and helps them to restore some control over their life, reduce the trauma and stabilise their emotional state.

The need for an anti-trafficking law in Albania

The UN Convention on Transnational Organized Crime (UNTOC) Protocol to Prevent, Suppress and Punish Trafficking in Persons, especially Women and Children, also known as the Palermo Protocol, was ratified in Albania in 2002. ”It was more like a regulated legal framework in aspects of the investigation, prosecution of criminals, than the legal framework for the protection of victims of trafficking, which was scattered in different social protection laws. We miss a comprehensive anti-trafficking law with a special focus on protection.I have seen the model law that UNODC published recently, that guide our approaches and efforts in lobbying for comprehensive anti-trafficking law in Albania”, - recalls Mariana Meshi, Executive Director of Different & Equal.

D&E is currently waiting for the steps that will be taken by the Government institutionally to continue the process of drafting the new law.

The participation at the various training and workshops organised by the UNODC Civil Society Unit was helpful and insightful in order to gain the technical expertise and knowledge on combatting organized crime. It was also useful in terms of networking and connecting with other actors in the region and the world. “The participation at the UNODC course creates an opportunity for further engagement for the implementation of UNTOC. Civil society organisations should play the important role of watchdogs, otherwise, we cannot hope to make changes. The SE4U training could be a special project that might help us to monitor governments performance.” – stressed Stela Tanellari Caushi, Deputy Director and Manager of the reintegration programme for victims of trafficking, who took part in the third online self-paced course onStakeholder Engagement for the implementation of the Review Mechanism of the UNTOC (SE4U). This course is part of the SE4U project to facilitate the engagement of civil society in the UNTOC review process.

Mariana Meshi adds: “We know that the government is trying to be on the same line with the international movement and changes, so I think this is a very good momentum for us and civil society to use it in our lobbying and advocacy efforts with the Government. The SE4U project is a very good guide when we finally can sit with the Government and other civil society organisations to draft the anti-trafficking law in Albania”.

Apart from the anti-trafficking law lobbying efforts, D&E is working on increasing the capacities of the professionals working in the anti-trafficking field, including law enforcement, social services, NGOs and others, establishing a good network inside and outside of Albania. D&E has embarked on a long journey to build up a society without trafficking, exploitation, abuse or discrimination where everyone’s rights are respected, and where everyone can pursue opportunities equally.