Integrity Project, a coalition against corruption in Namibia 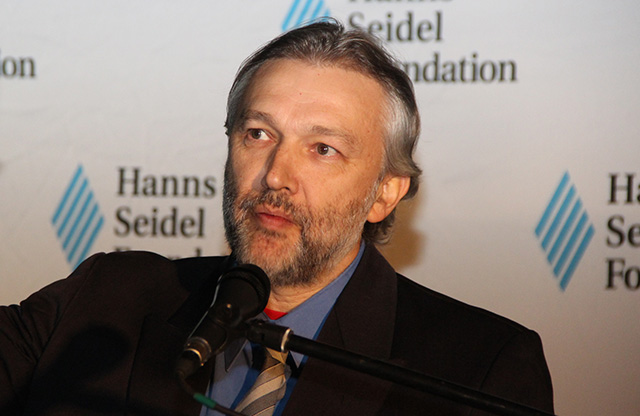 On 15 February 2022, the Institute for Public Policy Research (IPPR) launched a new anti-corruption project called Integrity Namibia. This three-year project aims to build a national network amongst non-state actors, including civil society organizations (CSOs), labour unions, and the media with the aim of tackling corruption. It will include the publication of research papers on legal and policy issues, and the establishment of an online reporting platform for whistle-blowers. Established in April 2001, IPPR aims to provide independent, analytical, critical yet constructive research on social, political and economic issues that affect development in Namibia.

“The first idea is that people must commit to trying to clear out or join the fight against corruption in their own sectors,” said Graham Hopwood, Executive Director of IPPR, based in Windhoek, Namibia. “We want to get the civil society organizations, the private sector companies, different authorities, and the media to join in the process of consultation and see how they could be involved and shape the coalition. We are starting with conferences around the country this May. We plan to cover most of the regions by the end of 2023. In 2024 we are planning to organize a national conference, where we will launch the coalition”.

With the three-year project Integrity Namibia project, IPPR is seeking to focus on the roles that key bodies and sectors such as the media, courts, auditor general, civil society and the private sector can play in tackling corruption. Hopwood quoted Afrobarometer survey in 2019 which showed that the public’s trust in political institutions has declined sharply in Namibia, up to 20% decline in the case of trust in the courts of law. He stated that the growing sense of impunity in the country had to be met head-on. 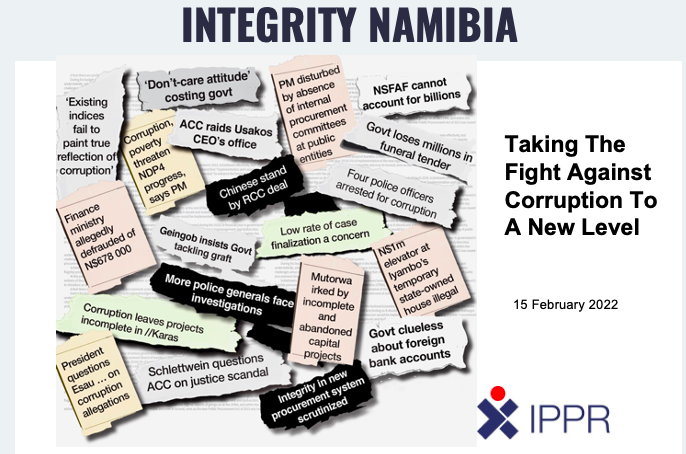 “We look at the Integrity Pledges and Codes of Conduct, that the sectors and agencies signed to engage in anti-corruption, and we will do our utmost to root out corruption in Namibia,” adds Hopwood. “We want to hold the government accountable, to apply more public pressure based on effective research. Therefore, we want everyone involved in solving the issues together.”

This will involve a national mobilization campaign alongside a series of research-based interventions, including publications that will inform mobilization work. "We want to engage a broad range of CSOs, as well as professional associations, sports organizations, media, editors, unions, to name a few”.

Educating people to get involved

IPPR is also doing a parallel report on the United Nations Convention Against Corruption (UNCAC) implementation in Namibia for the UNCAC Coalition. “During the country visit of the second cycle, the peer reviewers from Canada and Ethiopia meet with CSOs, and IPPR facilitated that meeting with the Anti-corruption Commission,” said Hopwood. “We were able to express our views, pointing to many of our issues, including the non-enforced Whistleblowers Protection Act. Due to Covid-19 pandemic our report was delayed. We’ve been interviewing people about the implementation of the UNCAC. We will see it in a few weeks. Some progress has been made though.”

Finally, to address the absence of a formal functioning whistle-blower reporting system, IPPR will launch their own whistle-blower platform to receive reports of corruption and other wrongdoing in a confidential and secure manner. The Whistleblowers Protection Act 10 in Namibia was indeed enacted in October 2017 but has not been fully implemented due to a lack of funding. The law calls for the creation of a whistle-blower protection office and criminalizes retaliation against journalists or witnesses who testify to misconduct and corruption.

At the same time, IPPR does not neglect its primary function as a think tank. They are very active in the media, with nearly 300 citations a year, in TV, radio, online or print. Graham Hopwood worked as a journalist and chief sub-editor for The Namibian, the country's main daily, from 1992 to 2004 and reflects on the changing nature of fighting corruption caused by the pandemic. "The Covid-19 pandemic made us move our meetings online, as we could not have physical events. But we used the Facebook live feature and set up a YouTube channel, and with this, we can now reach hundreds of people. Our messaging seems to be effective: we had a big reaction to the launch of the Integrity Namibia project.” In conclusion, Graham Hopwood stresses that they are educating people to get involved in anti-corruption activities, because in “this way, people’s anger translates into positive action”